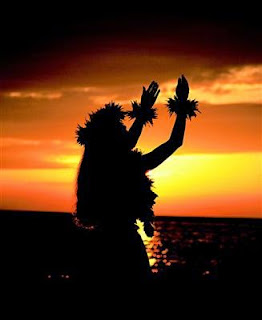 Huna is a modern or western label given to an ancient system. In ancient times these teachings were not called Huna, because Huna means secret. Since they were well known, they were obviously not a secret. We use the term Huna because it is widely recognized; however, in ancient times, other labels were used.

Huna comes from ancient times, it is one of the original arts and sciences of healing and spiritual development. We believe that it may be as old as 35,000 years and is a part of the original teachings of the peoples of the earth which were centered here in Hawaii on a continent which now, no longer exists. All that remains physically of that land are the mountain peaks of the island chain called Hawaii.

Huna was originally called Ho'omana. Ho'o means to make. Mana means life force, equivalent to Ki (as in Aikido), Chi (as in Tai Chi) or Shakti in the Sanskrit language. Taken together the word Ho'omana means empowerment or to empower.

The teachings of Huna that are humbly shared by Matthew James are different from most seminars available (even other seminars in Huna). Pappa Bray (the son of Daddy Bray) gave Tad James permission to learn, practice and teach the Huna of the Bray family. This lineage is now entrusted to Tad's son Matthew James and therefore, it is more than a seminar, it is an introduction to a way of empowering yourself shared through a honored lineage.

Huna is about empowerment, about increasing your spirituality, energy, and metaphysical healing powers. What if you could experience and connect physically, emotionally, mentally, and spiritually with a Higher Power that can empower you to bring into your life whatever you desire.

The Huna teachings are very similar to the Egyptian teachings of initiation into the Order of Melchizedek during the Third Dynasty. Huna, in Hawaiian, means "secret." Huna, in its purest form is ancient knowledge enabling a person to connect to his or her highest wisdom within. Understanding and utilizing the fundamentals or "seven principles" of Huna is intended to bring about healing and harmony through the power of the mind. This healing art and earth science is spiritual in nature, experiencing its concepts gives us the opportunity to integrate mind, body and spirit. One might acknowledge Huna teachings as one of nature's tools helpful in development of inner knowing and enhancing innate psychic abilities.

* IKE -The world is what you think it is * KALA -There are no limits, everything is possible
* MAKIA -Energy flows where attention goes
* MANAWA -Now is the moment of power
* ALOHA -To love is to be happy with
* MANA -All power comes from within
* PONO -Effectiveness is the measure of truth

Huna teaches that the high self cannot manifest a prayer unless it receives the needed mana from the middle and low selves. Thus, it is essential, according to Huna teaching, to accumulate a surcharge of vital force before beginning to pray to the high self. A great deal of emphasis is given in the Huna teachings to how this is done.

Huna teaches a number of ways to accumulate extra energy:

1. Asking and commanding the low self to build up a surcharge of vital force for use in prayer

3. Deep breathing, which causes more blood sugar to be burned -- this is the main method used

6. Visualizing vital food rising like a fountain of water from the base of the spine up through the top of the head

7. Holding a mental attitude of gaining personal power and strength such as the attitude you would maintain when preparing for a race

9. Affirmations spoken out loud, "The universal life force is flowing into me now. I can feel it!"

Huna teaches that the only sin that exists is hurting another person. You must balance out the hurt on all levels.

The last step in the process is to create a proper thought form prayer. Huna teaches that thoughts are like seeds. They create reality. You clear the path, remove negative thoughts in the low and middle self. You can write your thought form prayer on paper. Now visualize it. Build up vital force in the shadow body of the lower self for the use of the middle self when the prayer action begins.

Now you must see the prayer manifested. Do this daily until the desire result is accomplished.

According to Huna teachings this is the same process that accounts for the phenomenon of Apports. This usually refers to the of physical objects over long distances by discarnate spirits. The explanation the Huna gives is that the discarnate spirit somehow obtains an accumulation of extra vital force and uses it ot dematerialize the physical object into its etheric, or shadow, form, then moving the object to the desired place and materializing it back into physicality.

Huna teaches that it is also possible for the high self to control such things as weather, animals, insects, plant life--actually anything in this physical plane. The final goal of Huna teachings is the integration of the three selves.
Email Post