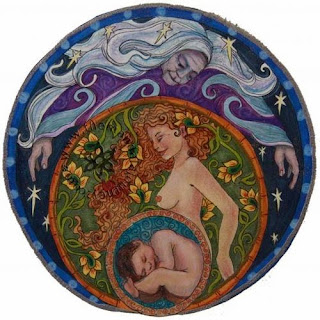 From Anglo-Saxon med-wyf, "wise-woman or witch". Even in the Christian era,sacer or untouchable for as long as 66 days after giving birth (Leviticus 12:5) and by canon law, a mother was not allowed to enter a church until 40 days after childbed.
priestess of the Great Mother maintained their monopoly of obstetrics, for most men were afraid of the taboo mysteries of birth. The Bible declared a new mother

For the first half of the Christan era, the arts of medicine remained almost exclusively in the hands of "wise-women" because ancient healing shrines had been devoted almost exclusively to the Goddess's priestess. In ancient Egypt, midwifery was the province of Sevenfold Hathor who gave each infant its seven souls. The Malayan Semai still say all midwives are holy, partaking of the spirit of the First Midwife who lives in the highest of the seven heavens, each on of which ruled by one of the Seven Celestial Midwives, identical with the Hathors. An earthly midwife is a sort of fairy godmother, with a spiritual tie to each child she brings into the world.

Mexican peasants attribute similar powers to the recibidora who combines the functions of the obstetrician, godmother, priestess, and witch. She performs complicated knot-magic in binding and tying the umbilical cord and cast spells for the future fate of the newborn.


Pagen Rome recognized several kind of midwives, who received separate offering after a successful birth. There was the obstetrix who performed the delivery; the nutrix or nurturer who encouraged the mother's milk and taught techniques of nursing; and the ceraria priestess of Ceres charged with birth rituals. All were connected with the women's temple, like the Greek Horae who were temple-women on earth and ascended to heaven as midwives to the Gods.

Medieval Christianity detested midwives for the connection with the pagan matriarchy and Goddess worship. Churchmen viewed them as implacable enemies of the Catholic faith. Handbooks of the Inquisition stated: "No one does more harm to the Catholic faith that midwives," because they invariabley offered newborn children to the service of the devil with a magical baptism by the kitchen fire. The real reason for ecclesiastical hostility seems to have been the notion that midwives could help women control their own fate, learn secrets of sex and birth control, or procure abortions. The pagan women of antiquity had consideralbe knowledge of such matter, which were considered women's own business, not subject ot male authority. Patriarchal religion however forbade midwives to assist thier patients in preventing conception, relieving themselves of unwanted pregnancies, or easing their birth-pangs.

Towards the end of the 19th century male doctors moved in on the last remaining area of exclusively female medicine, and took themidwifery-trade away from women. At the instigation of the American Medical Association, the U.S. Congress outlawed midwives, and the new male "obstetricians" replaced them. Frequently, an elder midwife found herself out of work, or even in jail for illegal practice , in a community most of whose members she had brought into the world!