Who were the Amazons? 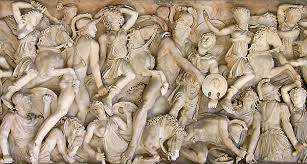 The Amazons were a race of warrior women within Ancient Greek civilization. Though their origins remain in dispute, the lands most connected to the Amazons are Libya, Thermiscrya, which is on the Anatolia peninsula of modern day Turkey, and the Black Sea region of Eurasia. Until quite recently archaeological evidence concerning the Amazons has been scant, but highly suggestive that indeed a mythic race of warrior women may have fought along side men with equal status. Yet, such evidence does not follow with the traditional Greek mythic view of the Amazons. The Amazons in Greek myth were an entirely autonomous race, with entirely different customs than that of mainland Greece (or for that matter the Peloponnesus), and their prominent presence within Greek mythology served a very suggestive purpose within Greek myths. This purpose whether to reinforce the status quo, or the patriarchy of classical Greece, lends itself open to interpretation. Thus, there are two views of the Amazons which have taken a prominent place within the research sphere on the Amazons. Namely, up until very recently (in the 1990s) the Amazons were seen only as a mythological phenomena. Only recently has archaeological evidence suggested the existence of the Amazons (and evidence is still being unearthed throughout Eurasia). Taken as either an archaeological phenomena, a myth, or a mixture of both, a picture of the Greek Amazons can be gleaned. The following pages examine the Amazons, in their mythical, cosmological, and archaeological aspects.

Who were the Amazons?

What is known of the actual Amazons within the Aegean is very little, and yet intrigue about a race of dominant warrior women in the bronze age has flourished from ancient times into the present. The obvious question asked by most scholars has been, "who were the Amazons, and did they actually exist?". Research into the Amazons is extremely limited and at times contradictory. There are numerous accounts of the origins of the Amazons, most concurring that the black sea region was their original settlement. To what extent the Amazons settled into the Black Sea region has not been fully ascertained. Some sources say they reached as far south as Libya, some to the Anatolia peninsula, others as far west as the Mongolian region of Eurasia. These accounts are further conflicted by the later Greek accounts of the Amazons. According to the Greek accounts, when the Greeks themselves began to settle into the area of the black sea, they found no Amazons. As a result and to explain this discrepancy, the myth of Hercules and Hippolyte was created to explain their disappearance. According to the myth, Hercules led an expedition through the Amazon land to obtain the girdle of Queen Hippolyte (the queen of the Amazons), during this time he managed to expel and conquer all the Amazons in the district.

Regardless of the myth, modern and ancient scholars remain perplexed by the question of whether the Amazons existed at all. Plutarch, a Greek historian, concluded that the Amazons did not exist as a race of warrior women per se', but were merely women fighting alongside men in battle. Herodotus, another Greek historian, believed that the Amazons did exist within Greece. Other scholars have even ventured that the women were in fact male Persian soldiers who shaved their beards off and dressed as women in battle. These theories and questions have been compounded by the view of Amazons within Greek art. The early depictions of Amazons were similar in style and likeness of Athena, as time progressed Amazons were given the likeness of Artemis. The final depictions of Amazons share slightly Persian features, a likeness (since the Greeks were in constant conflict with Persia) which can be best viewed as anomalous.

Outside of the questions of the Amazon origins, other questions pertaining to Amazons concern their view of men, and if they were a fierce (blood thirsty) people. The Greeks often questioned (as do modern scholars) how the Amazons, a race composed entirely of women, were able to sustain themselves throughout the generations. The most credible theory holds that the Amazons had contact with men from other lands, the Amazons kept the female children born to them, and sent the male children to live with their fathers. As to the Amazons blood thirsty nature, Quintus Smyrnaeus wrote of them during the Trojan Wars:

"In the pure rapture of triumph the Amazons charged, and with anguished groans and shrieks the Greeks perished, their manhood withered by the women from the fierce and untamed northlands. Like Goddesses amidst earth born heroes the Amazons pursued their reeling foes, dashed them down, cut them apart, and, scoffing, tossed them through the air - till the Greek formations dissolved in consternation."

The Amazons by and large were a race of fierce warriors, who on numerous occasions laid siege in Attica, and were even a threat to Athens. What is certain is that the Amazons were formidable fighters which the Greeks feared, but as to the Amazons being blood thirsty the question still remains.

Traits of the Amazons

The Amazons were a race of fierce warrior women. Speculation into their lives and the way they lived has been passed down through generations by myths and legends. Whether they were feared or admired, scholars have looked at the Amazons in one of two ways- as a purely mythological phenomena, or as a mixture of a mythological phenomena with marked archaeological evidence. Only within the past 5 years has archaeological research suggested that the Amazons were not purely a matter of mythology. To understand the Amazons, one must look at them from both view points before formulating a conclusion. The Amazons did exist in a functional mythological context, and recent archaeological evidence has only begun to scratch the surface as to their formal origins.

The Amazons were fierce warrior women. From birth they were brought up to be warriors. Female children in the Amazons tribes were said to have their right breast seared during childhood to facilitate the use of a bow. Their main weapons were the bow, the librys (a double edged axe), and a crescent shaped shield. The Amazons were said to be able to tame and ride horses long before mainland Greece acquired the skill. The ability to ride on horseback gave them an obvious edge in battle and added mobility. Accounts as to the culture and rulership of the Amazons remain sketchy, however some sources say there were two Amazon queens; one who ruled over domestic affairs and one who ruled over battle and warfare. Conquests of the Amazons were throughout Greece, and their legacy of fierceness and triumphs in battle were noted by the Spartan leader Lycurgus as well as many Greeks.

Were Spartan Women Remnants of the Amazons?

Research concerning the Amazons and Spartan women is at best sketchy, however, it is evidenced by many historians that the Amazons did have some elements and influences in common with Sparta. Spartan women had much more political freedom than within other cities such as Athens. A Spartan woman was expected to be fierce and be able to defend her land. This can be exemplified in the goddess Artemis. The patroness of Sparta and of the Amazons, Artemis was the goddess of the wild hunt, protector of animals, protector of women, young girls, and youth, with a connection to adolescence and childbirth (The Amazons in later Hellenistic periods were associated with Dionysus the god of wine, as either his allies of his opponents.). Though the worship of Artemis was common throughout the Greek world, only in Sparta was a warrior spirit and sense of equality allowed to flourish among the upper-class Spartiate men and women.

Was Sparta influenced by Amazon women? If so what are the differences and similarities between the two cultures?

The answer to any of these questions is not entirely clear in that there is a limited amount of information on the Amazons. It is not beyond speculation to say that if the Amazons did exist that they lived largely within a matriarchy (female dominated), rather than in a patriarchy (male dominated) as in Sparta. It is also not unlikely that the Amazons had different ideological concerns than the Spartans. Perhaps the Spartans created their view of women from the stories they heard or from actual meetings with the Amazons? Or perhaps the law giver Lycurgus, who upon hearing tales of the Amazon battles in the Trojan war, was inspired to raise the status of women, and give them the same brisk upbringing as a Spartan male. It is unlikely that the Spartans simply allowed women the right to own and take over their land if their husbands were away at war, and take a second husband if need be, overnight. Such a right on it's own remains contradictory to the rest of Greece, which did not allow women to own land (and also excluded many other rights as well), or in some cases did not allow them to take a second husband if the first died. It is more than likely that the women of Sparta were allowed to own land in times of war, simply because Sparta feared a revolt from the helots, and required strong women to fend off such an attack. In such a case, the reasoning of Plutarch on the Amazons would seem to fit, that the women fought among the men as near equal.

Did the Spartans originate from the Amazons?

No definitive answer can be given, there is a possible influence, but it is unlikely that the two interbred or otherwise, and a limited number of resources leave many questions concerning the Amazons and the Spartans open to interpretation and further research.
Email Post