What Is the Double Goddess? by Vicki Noble 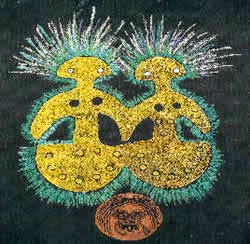 The Double Goddess is an ancient icon with luminous meaning for contemporary women, expanding on the single images that have prevailed in prior considerations of the Goddess. Among the numerous female figures important in the ancient world appear many twin figures of two women as well as symbolic dual female representations such as the Double Axe, birds, lions, leopards, and snakes. I see these Double Goddess figures as profoundly representational of the whole yin-yang female biological cycle and its shamanistic relationship to life on this planet, human evolution, and the development of civilization.

The long and rich heritage of Double Goddess figurines and painted images reflect the organic cycles of nature that informed the ancient Goddess religion, archetypally expressed through the body of every woman as the repeating alternation between ovulation and menstruation. These two aspects of the feminine are iconographically depicted in the multivalent and widespread image of two divine women, expressing the dual ples of nature: death and life, dark and light.

The image of the Double Goddess is a vital missing piece for modern women, as it graphically portrays our exquisite and unique bipolar existence in a positive, healthy way.

The innate back-and-forth mystery of ovulation and menstruation, unique to our species and magically ( magnetically) synchronized with the cycles of the Great Goddess Herself in Her dual planetary aspects as Earth and Moon, and the mythic forces of life and death.

The Double Goddess represents the idea of female sovereignty in a context of ancient female yogic and shamanistic practices and principles that formed the organizing structure of most ancient cultures in the world before patriarchy.
These double images as well as the aried mythologies of Double Queens found in different parts of the ancient world suggest that the icons represent a female lineage (matrilinearity) in the form of a continuous "storied tradition" of female
sovereignty.

We'll probably never know if any of the Double Goddess images from ancient civilizations were meant by their creators to represent physical love between women. Or, more accurately, we may not ever be able to prove that such a likely contention is true. Certainly some Double Goddesses are portrayed in such intimate ways that contemporary scholars discussing them have become tongue tied or shy about what they are seeing. Some double figures show two separate women in significant intimate contact, embracing or wearing a shawl around their shoulders or a girdle around their hips, which may indicate physical same sex love.

Lesbians who have shied away from the Goddess movement because of its largely unconscious, but profoundly heterosexist bias, can relax into the knowledge that a lineage exists, going back to the beginnings of human civilization, sanctioning female to female relationship as the original, matriarchal bond and a model of community leadership. This model has mostly been ignored by mainstream culture, even though it is a truism at this point in history that lesbians were and are the vanguard of the women's movement. Significantly for our discussion, much of this impact was made through the influence and productivity of lesbians couples, in a contemporary version of our ancient Amazon Queens.

This model can be seen in the tantric counterparts, Athena and Artemis. Athena, credited with inventing all of civilization's arts, became Goddess of the city-state, crafts, and culture, and Artemis remained Goddess of wild nature. Both remained "virgin" neither was willing to relate romantically with men and both were connected with Amazons.

Rarely does a scholar mention the all to obvious likelihood that either or both of these Goddess types might have found their sexual fulfillment with other women. Artemis, the shaman-priestess, might naturally discover her romantic partner in Athena, the physical warrior and head of state. Instead, both are treated not as if their Virgin Goddess status referred to the intactness of a woman belonging to herself, but rather as a kind of insular chastity that repudiated sexuality altogether.

With the mass of recorded history, mythology, and artifactual evidence, the existence of Amazon Queens and warrior women can hardly be contested, yet it is consistently denied, ignored, and erased by contemporary academic scholars. Amazon warrior women exemplify female resistance movements everywhere. They evoke the wild women who,like Miranda Shaw's eternally transgressive Indian yoginis, " always speak truthfully and are proud of their strength; women whose minds are powerful and energetic; women who delight in shrewish behavior and speak boastfully; women who are fearless, revel in their own ferocity, and women who derive pleasure from the fact that they are untamable."

The warrior woman stands her ground in the physical world, like an archer or martial artist. The priestess fights her battle on the invisible plane, using the tools of her trade to support the powerful working of her focused mind. Together, in the tradition of Amazons from every time and place, they fight back in an ongoing refusal to allow the world to be destroyed.