Link to listen to song 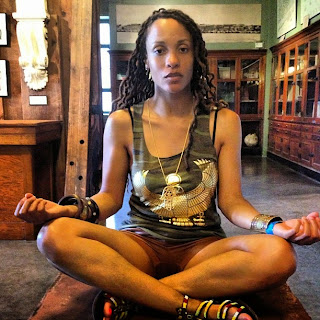 I am the Earth and Water, I am the Full Moon. I am the First Mother, the Universal Womb. They call me

Sacred Lotus Wisdom of the kind Supreme. The mother-ship that brought the first terrestrial being. I came from distant plants and now I have returned. I am the great Goddess come to you in human form.

Mysterious by nature, I hold my magic wand, cast my cowrie shells and read them in the dirt I stand on. My power is electric, you fell it in my gate. I will live on when other perish in the end of days. They call it immortal, I move thru space portals. My body turns to dust I trade it for a better model. I am the Shrine keeper, the civilization Teacher, I am the sun's reflection and
the Divine Receiver.

I birthed the last Gaints, now called the Juggernauts, when I designed the trees I made the roots from my natty locs. I am the fertile ground and I am heaven's skies. I'm made of dark matter and full of pure light. I'm just a tiny proton inside the smallest atom. I am a black-hole pulling stars inside my chasm. You think you know me but my name eludes you well. I am your consciousness and I'm your dream-spell. I am but all things yet I am none at all. Enemies fear me but mostly they just respect and awe.

Saroc the mc hails from the southeastern area of Washington DC, a city that’s a mashup of poverty stricken hoods, a strong radical movement, and a fierce loyalty to cultural preservation. This is the cocoon from which Saroc was birthed and bred. A product of Afrikan-centered parents, Saroc developed a rebel mentality from an early age. She grew up on the music of Jimi Hendrix, Gil Scott Heron, and Earth,Wind & Fire. Her musical soundtrack was a klash of sounds, from gogo, to rock, to hip hop. This foundation began an aural quest for different sounds and concepts in music. It wasn’t until 2002, when Saroc met Atlanta producer Sol Messiah, that she began her love affair with the mic. Armed with the lessons and musical genius of Sol Messiah, she developed a sound that was 1 part hood poetry, 2 parts otherworldly, and totally new and fresh. From subject matter ranging from melanin to pyramids, Saroc spits metaphysical ideas over melodic hip hop beats, seeking to fuse knowledge of self with great music. She seeks to create not just a couple of albums, but a full-fledged musical movement. A cultural griot, Saroc intends to reinstate the art of emceeing to its former glory, passing down the legacy 1 sixteen at a time.